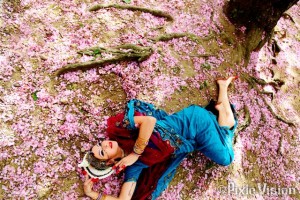 Excited, exhausted, exhilarated so many emotions, movements, and memories surface once returning to The Dance. My exploration in dance has been life long- but only in the past few years have I sought a teacher. Dance for me was always haphazard. It was a natural state of being that burst forth whenever the time was right. My body moving to and fro without guidance or discipline sometimes creating the most interesting shapes and styles never seen- and sometimes totally injuring myself because I wasnt using my body to support itself- because I had no idea how.

Fast forward to the past several years where performance became engrained with movement- which needed to be stylized. My arms had no where to go. My legs didnt know the beat. My mind couldnt keep up with one or the other. So then- finally- I sought a teacher. It was also one of the first times in my life I actually had the time to devote to a class. Sera Solstice, visionary, epic movement artist, friend, creatrix, and someone who totally engulfs the term WOMAN became my teacher. She took me in and let me follow her through the lunar and solar cathedrals of her twist on tribal fusion bellydance- East Coast Tribal. It hasnt been easy for me- im not one of those people born with the innate ability to do everything super awesome first time I try- its a path. Its a choice. Its a devotion and ever unwinding faerytale that has led me “home.”

Over the past few years, feeling the tugs of gypsy blood in my veins, I have started venturing further and further away from home. Performing, dancing, teaching, and playing in oceans and mountains that are older than time. My travels eventually sailed me across the sea to Indonesia where I studied traditional Balinese Dance. I was recommended to take class with an amazing dancer Nikelle Khan . She is a great teacher, beautiful soul,  and also the one responsible for introducing me to where I am now- studying Odissi dance. An ancient devotional temple dance originating from Orissa, India.

This past February I had an opportunity to go to India. My boyfriend is dedicated to Isha Yoga and was going to volunteer at the ashram and so I took this time to be a student myself- and began to learn about Odissi dance. I took a very full on workshop in southern Goa with Chantelle Devi who gave me a solid introduction in the short amount of time we had. I danced everyday for 5-7 hours a day- in my downtime I was doing an additional 2 hours of movement practice- I couldnt get enough- when I wasnt dancing Odissi- I was reading it, watching it, and soaking it in. All of this- is still only the beginning. For Odissi dance is considered so intricate and difficult that one can study it for 20 years and still be a beginner. It is a path. And here I am- rerouting back onto this path. It feels good. It feels like settling back into a routine I never had. I danced Odissi and practiced my mudras for the rest of the time I was in India- but after I returned to NYC my practice fell by the wayside and I got distracted with those typical life things- like paying rent, and re-doing my website, and getting gigs, and took up playing the musical saw, and traveling and building- such is the life for someone who has a hard time just picking one thing and getting it done lolololol. However, something happened- and I stumbled upon a sweet but strict Indian teacher that was kind enough to let me join her class. . . and I have once again- returned to the dance.

It feels good. It feels easier, smoother, still hard- but not foreign, still difficult- but attainable- in smaller doses and more manageable with the day-to-day- but also building off all those hours, moments, days, cities, countries, mountains, sunsets of experience. And so with each day- my dance grows- and my body learns and neurons fire and then tomorrow I will remember it and execute it smoother than today. Thats the thing with dance- you have no choice but to be exactly where you are at. And it feels good to be home. Home in my own body. Home in my own space- still building toward the future.